Posted by Riverside Rentals Team in Tips and Tricks
From Riverside Rentals Blog Contributor RRutherford  (Click Titles for Recipe Pages)
Recently, my family and I went camping up to Ayton, Ontario. Some say that living in a 25 foot trailer doesn’t constitute as camping!  I say that if I cook more than one meal over the campfire, get eaten alive by black flies and mosquitoes and can see the stars through the trees at night, it is considered camping.  Prior to this week of rest and relaxation, I decided to prepare a menu to cut down on what was packed and to cut down on the guess work of what to eat besides hot dogs and hamburgers.  Here are some of the successful meals and the not so successful meals I found on the Internet and tried out camping.
1) Campfire Cinnamon Rolls

I was very surprised at how delicious these actually were!  I did find I had a lot of leftover orange that didn’t get eaten, but I am sure I could have done something with it.  None the less, an amazing recipe.  Buy the Pillsbury Cinnamon Rolls and some medium size oranges.  I found because of the smaller size of oranges I had, I had to cut each cinnamon roll in half.  Place the Cinnamon Roll dough into the orange halves, place on a tray and cover with tinfoil.  The orange peel not only keeps the dough from burning, but it adds a nice taste of orange to the Cinnamon Roll.  Delicious!!!!
2) Smore’s in a Cone 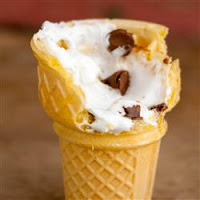 These were easy enough to prepare, but I have to say, I wasn’t all that impressed with them. I think there are really two issues with these that if fixed they would be way better.  The first is the cooking.  The recipe calls for wrapping the filled cones with tinfoil. They are then to be cooked over the campfire until everything is mushy gooey inside.  I hung these from a curl in the tinfoil and held them over the flame.  The bottom of the cone burned through the tinfoil and upon opening, all of the marshmallow goo stuck to the tinfoil. Weren’t bad but weren’t great either.
3)Potato Boats 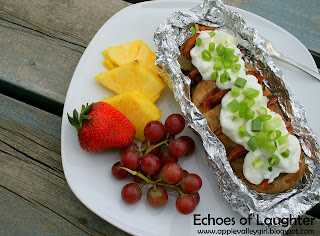 There is only one word for these….FABULOUS!  The trick to making these successful for camping is to bake them at home and then ensuring they are one of the first meals you have when you head out to the great outdoors.  We used Swiss cheese, bacon and ham but you could really add anything.  You could put roast beef, Gouda, cheddar and bacon.  You name it you can make it.  If you are a die hard camper, you can always put them in the campfire and bake them for an hour before adding the yummy stuff. 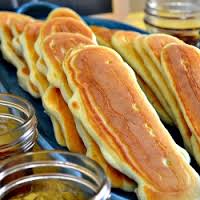 These were a hit with the family. The combination of bacon and pancakes is soooooo yummy.  I found using the pre-cooked bacon worked best.  You could substitute the bacon for fruit or chocolate chips. I did find that my dippers of course looked NOTHING like the picture, but I blame my really rotten camping pan. 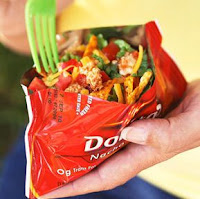 This is one of those really fun and easy meals.  The whole family quite enjoyed this one. Of course they thought I was insane when I suggested it, but they were thrilled when they got to eat their lunch out of a Doritos bag. 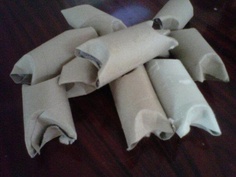 So this isn’t a food recipe but this was a great make ahead idea. Collect your dryer lint and toilet paper rolls.  Stuff the lint into the rolls then use them to start your campfires.